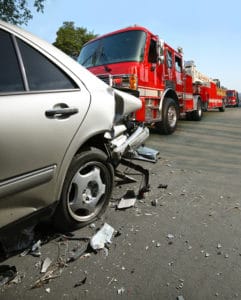 SAN JOSE, CA (April 19, 2019) – An inmate bus was among Thursday’s multi-vehicle fiery crash on the 880 Freeway near Highway 101 that injured several people.

According to the California Highway Patrol, the 7:34 a.m. accident involved a bus loaded with Santa Clara County Jail inmates.

The collision shut down three southbound left lanes on the 880 Freeway until 9 a.m.

Reports say at least four cars were involved, including a Toyota Prius that caught on fire during the crash.

CHP reported that at least some of the inmates suffered minor injuries. However, it is unclear how the crash happened, or which factors played a role.

An investigation regarding this crash is underway by authorities.

Car accidents can happen to anyone yet when we are alert and conscious of the road, we can avoid the dangers. Keep in mind that there are many drivers on the road. When we remember to drive carefully and defensively, we can avoid these hazards.

For more than 40 years, the Sweet Law Group has settled numerous cases involving personal injury, wrongful death, car accidents and disability law. If you would like to work with a seasoned attorney to fight aggressively for you and your future, call (800) 674 7852. We understand that you’re unable to tackle medical bills, a traumatic injury and distress. Call us so we can handle your case while you recover.