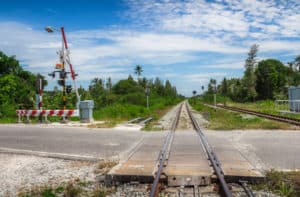 DUNSMUIR, CA (February 21, 2019) – A 33-year-old man was hospitalized late Monday after being hit by a Union Pacific train near Shasta Retreat and Mossbrae Falls.

Around 11 a.m., Kyle Hutchinson was reportedly a mile and a half from Shasta Retreat, taking photos and wearing headphones near the train tracks. An oncoming Union Pacific train sounded its horn several times to alert Hutchinson, but attempts were unsuccessful.

According to reports, Hutchinson is new to the area and was unaware that the railroad tracks were in use at the time. As he heard and saw the train approaching, he jumped off the tracks to avoid it, but his right front was hit.

Hutchinson was responsive when paramedics arrived and airlifted him to Mercy Mt. Shasta Hospital for treatment.

When standing or walking around railroad tracks, it’s best to be alert at all times. Trains can appear at any time and when we are aware, we can avoid them and stand from harm’s way. Remember this the next time you’re standing near the tracks.

When foraging for a personal injury law firm in California, you’re going to want a highly renowned and experienced firm to represent your wrongful death matter. The personal injury lawyers at the Sweet Law Group understands your plight. Economic and non-economic damages result from reckless traffic collisions. Understanding this, we have excellent resources at our fingertips to handle your case and win you justice and a satisfying settlement. Trust our attorney who has recovered thousands of cases. Call (800) 203-3061.