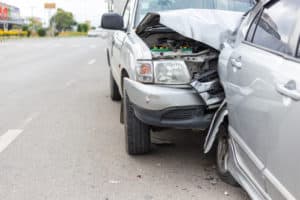 According to the California Highway Patrol’s Clear Lake Area office, the injured victims were identified as 62-year-old Kevin Schosek, of Anderson Springs, and 52-year-old Karen Brown, of Hidden Valley Lake.

The crash happened when Schosek was driving a 1999 Chevrolet 1500 pickup truck southbound on Highway 29 at speeds of 55 mph. Schosek reportedly experienced mechanical issues with his headlights and veered over the double yellow lines and into the path of a northbound 2004 Honda Odyssey, driven by Brown.

Brown, who was traveling at the same speed, noticed Schosek’s vehicle, in spite of his headlights being out, and swerved immediately in an attempt to avoid a head-on crash; however, Schosek tried avoiding the Honda Odyssey, as well, echoing Brown’s evasion, before both cars collided and came to rest, blocking both lanes of traffic.

Fire personnel and paramedics arrived at the scene and transported both victims to Adventist Health Hospital in Clearlake.

The CHP believes neither alcohol nor drugs played a role in the crash. Both drivers were wearing their seatbelts.

Distracted driving plays a huge role in car accidents. Put all distractions away and if you happen to be distracted by your vehicle, pull over immediately. It’s never safe to take care of other matters for you can put your safety in harm’s way when driving. Remember this whenever you’re driving.

The experienced personal injury lawyers at the Sweet Law Group are committed to helping you overcome this stressful time. We know you’ve been hurt and have been emotionally distressed. With our personal injury lawyers at your side, we can help you win your case. Our litigators are no stranger to handling disability law and car accident lawsuits. We hold more than 44 years of practice under our belt and a 98 percent success rate in our cases. If you would like to know more about your legal options, call us at (800) 203-3061.