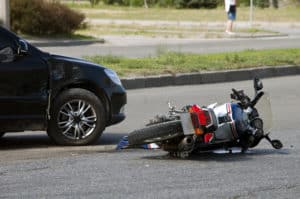 SAN JACINTO, CA (June 3, 2019) — A motorcyclist died after a collision with a vehicle on San Jacinto Avenue on early Friday evening, May 31.

As the Toyota moved across the northbound lanes of San Jacinto Avenue, the motorcycle crashed broadside with the vehicle.

The force of the incident sent the Toyota spinning up and over a nearby curb. It also sent the rider over his handlebars. He landed at approximately 50-75 feet further up the roadway, where he died.

Fire and rescue personnel pronounced Woods dead immediately upon their arrival at the scene of the crash at 5:22 p.m.

Riverside Sheriff’s Department ruled out alcohol and drug intoxication as a part of the incident. However, speeding is still suspected as a contributing factor in the collision.

In light of this tragic news, we’d like to express our sincere sympathies to the family and friends of Jeffrey Woods.

Contact the Sweet Lawyers to get your case filed with our skilled wrongful death attorneys. For more than 40 years, our firm has settled scores of cases like yours. Although no compensation can amount to the loss you’re enduring, justice is still an option if you wish to pursue. When deciding on a personal injury law firm, choose the Sweet Lawyers to fight tirelessly for you from beginning to end. Call (800) 674 7852.