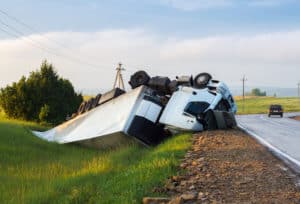 Friday’s commute was initially disrupted when a driver switched lanes and clipped a pickup truck. Subsequently, the car that caused the collision spiraled out of control and rammed into another passenger vehicle.

In order to avoid the crash, the semi-truck driver reacted quickly yet ended up tipping over the embankment next to the Pacific Avenue on-ramp. According to reports, the semi dumped loads of lumber onto the freeway, causing a three-mile backup.

Two lanes were reportedly blocked in the crash and two people, including the semi-truck driver, suffered injuries.

The 6:15 a.m. crash required crews and investigators to canvass and clear the area before opening the lanes to commuters.

Drivers are becoming increasingly comfortable on the road where their safety and others are at stake. Driving demands our full attention. It’s never wise to be distracted when behind the wheel. To reduce the risks of car accidents, switch lanes safely, look out for other vehicles and travel at a safe speed limit.

The Sweet Law Group holds the experience and expertise you need in a lawyer. Our firm will charge nothing until we win your case. If this interests you and you would like to discuss your personal injury matter with our attorneys, call (800) 674 7852. For 44 years, we have helped numerous families in their legal battle. From car accidents to wrongful death matters, we are specialized in many areas of the law and are willing to help you overcome this time.