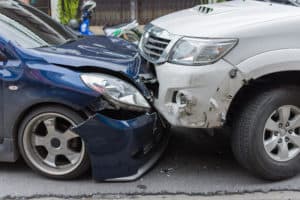 For an undetermined reason, Torres allowed the GMC to drift into the westbound lane. It then crashed into the Ford head-on.

As a result of the impact, the Ford overturned into a ditch off the road. Meanwhile, the GMC became disabled in the westbound lane.

Cosain had her two children in the vehicle — a 2-year-old and a 6-month-old. Both juvenile passengers were properly restrained in child car seats and were not harmed, according to Merced CHP spokesman Officer Eric Zuniga.

Torres suffered a major injury to his foot. An ambulance then took Torres to a nearby hospital, Zuniga stated.

In addition, Cosain was brought to the hospital for moderate lacerations to face and arms.

The investigation about the incident is ongoing. At this point, the CHP does not believe that drugs or alcohol were factors in the crash.

Both lanes of Santa Fe were shut down for approximately one hour.

Stay focused when driving but keep your eyes moving. Do not get in the habit of staring at the back of the car ahead of you. Periodically shift your eyes to the side-view mirrors, the rear-view mirror, and ahead of the road. Doing this, you can spot a potentially dangerous situation before it happens.

At The Sweet Law Group, we provide the best legal representation that will help you win a settlement. We will work hard to obtain the just compensation for your injuries, losses, and suffering and to pursue the justice you deserve. If you have suffered injuries from a car accident, you are not alone in this. Call us at (800) 203-3061 and discuss your case with us free of charge. We are here to fight for you.