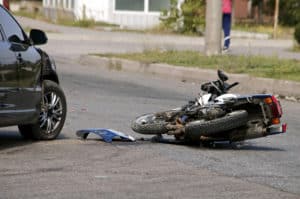 San Diego Police Officer John Buttle said the crash happened shortly before 4 p.m. The 59-year-old motorcyclist was riding a 2009 Triumph 1050 Speed Triple motorcycle. He was in the left-turn lane at the intersection but decided to travel westbound on Jackson Drive.

At the same time, a 62-year-old man driving a 2000 Honda Accord was on westbound Jackson Drive. He tried to avoid the motorcyclist, but the two vehicles eventually collided in the intersection.

The Honda continued westbound and subsequently crashed into the front of a 2008 Scion sedan. The Scion was stopped at a red light at the intersection of Jackson Drive and Cowles Mountain Boulevard.

First responders took the motorcyclist to a hospital with serious injuries. Officials said the injuries sustained were not life-threatening. There were no reports about the condition of the Honda and Scion drivers.

In the meantime, further investigation of the crash is underway. The police did not believe that alcohol was a factor.

Motorcycle riders rarely escape injury when an accident occurs. If you are riding a motorcycle, do not underestimate the bike’s speed and strictly follow traffic laws and the conditions of the road. For other motorists, do not tailgate a motorcycle and maintain a safe following distance. Give motorcycles a full traffic lane when you pass and remember that they too have equal rights on the road.

If you or your loved one has suffered injuries in a motorcycle accident, reach out to the Sweet Lawyers. With over 40 years in the legal field, we know what it takes to protect your legal rights. Call our offices today at (800) 674 7852 for a free consultation at a location nearest you. Or contact us 24/7 by email, online chat, and text message.