Home » INGLEWOOD, CA – One Hurt and Semi Truck and Car Crash on 405 Freeway at Century Boulevard 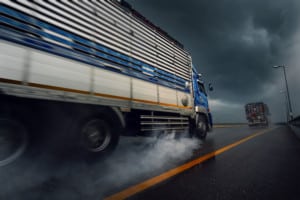 INGLEWOOD, CA – One Hurt and Semi Truck and Car Crash on 405 Freeway at Century Boulevard

INGLEWOOD, CA (December 27, 2018) – One person was hurt following a traffic collision between a semi truck and a sedan early Thursday morning in Inglewood.

The collision happened around 3:39 a.m. on northbound 405 Freeway at Century Boulevard off-ramp.

According to the California Highway Patrol, a gas tanker truck and a silver Toyota sedan collided in the HOV lane of the freeway.

Deputies from the Los Angeles County Fire Department responded to the scene and located one occupant who complained of pain to the chest and had trouble breathing. The patient also reportedly cannot move their right arm.

An ambulance unit was immediately dispatched to transport the patient to a hospital.

All traffic was stopped during the rescue and clearing operations.

There were no official reports stating what caused the crash or how it exactly transpired. The incident is still on active investigation.

In major roads, it is very important not to tailgate large vehicles or trucks. Remain safe and give trucks the room they need to safely negotiate the freeways. Do not try to accelerate to get ahead of trucks entering the freeway, or drive aggressively around them because they are slower and require longer to get up to freeway speeds.

If you were hurt in a traffic accident, call us today at (800) 203-3061 for a free consultation with an experienced personal injury lawyer. We at The Sweet Law Group have been handling accident cases for over 44 years now. We house skilled and reliable personal injury attorneys who can guide you in your legal battle. We look forward to providing good advice to help you make smart decisions about your case.