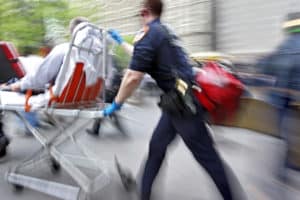 MODESTO, CA (March 6, 2020) – One person died in a big rig and motorcycle collision on H Street in Modesto on March 4.

According to the Modesto police, the motorcycle rider crashed with a big rig on H Street and Sixth Street. The authorities didn’t release the identity of the adult male due to pending family notification.

They also did not release the identity of the truck driver, who didn’t suffer any injury in the crash, said department spokeswoman Sharon Bear.

The incident happened just before 4:00 p.m. According to reports, the driver of the truck traveled north on Sixth Street, while the motorcycle rider headed west on H Street, when they collided.

Sharon Bear added, “They’re still trying to sort through what happened. They got a statement from the truck driver, but we’re also looking for witnesses.” Bear also noted that they are still investigating to identify whether drugs or alcohol played a role in the collision.

The motorcyclist received treatment from first responders at the scene. Responders also took him by via ambulance to Doctors Medical Center, where he later succumbed to his injuries.

As a result of the accident, authorities shut down the area during rush hour. The closure lasted for multiple hours.

Moreover, the authorities are urging anyone who saw the collision, or has information that could help with the investigation, to call Traffic Investigator Randy Raduechel at 209-572-9592 or email raduechelr@modestopd.com.

Sweet Lawyers extends our genuine condolences during this difficult time to the family and friends of the man who passed.

Losing a loved one in a motorcycle crash is a heavy load. Contact Sweet Lawyers. Our motorcycle accident attorneys are here to help you. With our seasoned lawyers who have varied experience in the field, we will get the justice and compensation you deserve. Contact us at (800) 674 7852 . You can also reach us 24 hours a day and 7 days a week by online chat, text message, and email.