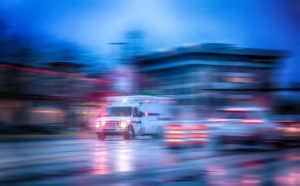 SANTA CRUZ, CA (June 10, 2019) — A hit-and-run crash at Cedar Street and Maple Street left a woman critically injured Wednesday night. According to the police, a vehicle hit the woman shortly after 7 p.m. The Santa Cruz police and firefighters responded to the incident.

First responders found the woman stuck underneath the vehicle when they arrived at the scene and extricated her. Subsequently, they transported the woman to a trauma center where she remains in critical condition.

The Santa Cruz police officers received a description of the suspect who fled the scene. Afterward, they immediately began searching the area. The police said a suspect was seen jumping neighborhood fences in an attempt to flee.

Officers detained two Hispanic males during the investigation. One of them was the registered owner of the crash vehicle.

In the meantime, the Santa Cruz police urge anyone who may have information about this crash at Cedar Street to contact the Santa Cruz Police Department Investigations Section at (831) 420-5820.

It is important to abide by all traffic laws and observe safety precautions whether you are a driver or a pedestrian. If you’re driving, avoid distractions and look out for pedestrians at all times. If you’re a pedestrian, cross at designated crosswalks or intersections. Obeying traffic laws and being cautious of the conditions of the road can help prevent an unforeseen accident.

You can expect distinguished legal service from The Sweet Lawyers. Learn what separates our personal injury law firm from others. For more than 40 years, we’ve helped families recover from their wrongful death and personal injury cases. Call (800) 674 7852 for a free consultation with a professional in your area. We can also be contacted by email, online chat, and text message 24 hours a day and 7 days a week.