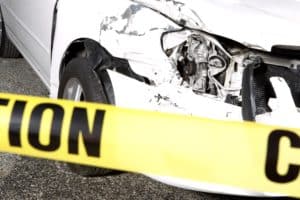 The crash happened around 12:07 p.m. involving a white Ford Explorer and a black BMW.

According to the California Highway Patrol, the Ford SUV was traveling eastbound on the freeway when it hit the center divider and drifted into the westbound traffic, striking the BMW. It then overturned and landed on the fast lane.

A female occupant in the Ford, approximately 40 years old, suffered a head trauma as a result of the accident. The patient was transported to a hospital in an unknown condition.

A SigAlert was issued in the area, blocking four freeway lanes for about an hour while officers and crews worked on the scene.

It is unknown if drugs and/or alcohol were contributing factors of the crash. Further investigation is underway.

To avoid getting into an auto collision, always drive defensively. Some defensive driving tips to keep in mind is keeping a safe distance, driving at a safe speed limit, preparing yourself for any surprises and avoiding dangerous situations such as being in someone’s blind spot. Accidents happen within a moment’s notice so it is important to be prepared.

When you get involved in a car accident leading to injuries, it is important to seek legal counsel from an experienced personal injury attorney. At The Sweet Law Group, our team of highly skilled and award-winning lawyers have been providing tremendous help to injured victims for over 44 years now. If you need someone to take care of your case, please call our hotline at (800) 203-3061 for a free consultation.