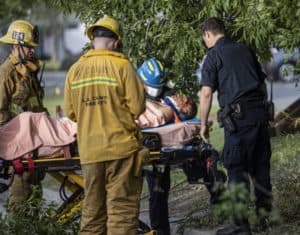 Walla Walla, WA (August 8, 2020) – On Monday, a Pasco woman got injured in a rear-end collision on East Poplar Street.

The accident happened before 2:07 p.m. near South First Avenue.

Authorities have not released her name yet but identified her as a passenger of Donald J Davis from Pasco.

Rescuers rushed the victim to Providence St. Mary Medical Center. Police have not yet disclosed further details on her condition.

Walla Walla Police Department said Pasco was traveling west near the Walla Walla Union-Bulletin parking lot in a 1991 Ford Tempo. He slowed down for a big rig exiting the parking lot.

Sgt. Eric Knudson said that is the same time that Davis’ vehicle was struck by a 2011 Chevy Suburban driven by Beatriz Munoz Ramirez also from Pasco.

Call us if you or someone you love has recently been involved in a similar auto accident. Our experienced attorneys will guide you through every step of the way. To file a claim, call (800) 674 7852. Let’s discuss your options in detail. Besides, you can also reach us through our online chat, email, and text message 24 hours a day, 7 days a week.