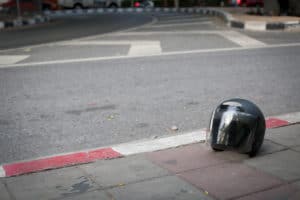 The CHP revealed that 45-year-old Erick Rients attempted to pass when he was hit by a car. Rients was riding east on Elm Street and Pierce Street on a 2005 Suzuki GSXR 1000. He was traveling behind a car driven by a 17-year-old Taft girl in a 2007 Jeep Liberty.

Meanwhile, as the vehicle slowed down to turn left onto Pierce Street, Rients attempted to make an illegal pass through the intersection. As a result, Erick Rients’ motorcycle crashed with the left side of the teen’s vehicle.

The impact threw the motorcyclist from his bike and suffered major injuries. On the other hand, the teenage driver was uninjured.

The firefighters and CHP officers closed the intersection as a medivac helicopter landed to airlift Rients to Kern Medical for treatment.

Furthermore, the CHP revealed that drugs or alcohol didn’t play a role in the crash.

The Risks of Riding a Motorcycle

Motorcycle accidents are prone to be severe because riders lack the stability cars normally offer. Moreover, a motorcyclist is more vulnerable to road hazards, weather conditions, and is less visible to other drivers.

Always be alert and focused on the road. Do not use smartphones or other unnecessary devices. Most especially, abide by posted speed limits while on busy boulevards.

If you see yourself unfit to drive in a moment, use a rideshare app instead.

According to the Association of Safe International Road Travel, more than half of all road occur among vulnerable road users—pedestrians, cyclists, and motorcyclists.

Thus, it is valuable to know what to do if you get involved in a motor vehicle accident

“Hiring the right firm, who has the resources to spend, can make all the difference in getting justice for a client,” explains Mark Sweet of Sweet Lawyers.

If you’re looking for an expert that can ensure you the justice and compensation that you deserve, turn to Sweet Lawyers. Our incessant pursuit of justice for our clients for over 40 years is the edge you need to win your case. We have settled cases among personal injuries and have helped our clients get their livelihoods back. Call our offices today at (800) 674 7852 for a free consultation at a location near you. For your convenience, you can also contact us 24/7 by email, online chat, and text message.