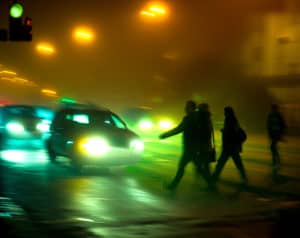 FULLERTON, CA (February 12, 2019) – An alleged DUI driver was arrested Sunday after ramming into a group of pedestrians – leaving at least 10 injured – on Santa Fe Avenue near East Commonwealth Avenue.

The incident occurred around 1:45 a.m. when witnesses say a group of bystanders was engaged in some type of altercation with a man in a red truck, urging him to get out. Shortly after, the driver, identified as Christopher Solis, tried escaping the crowd when several guys began striking the truck with their hands. Solis reportedly panicked and struck the car in front of him, took off on Santa Fe Avenue and crashed into several more vehicles before ramming into pedestrians.

Fullerton police officers responded to 100 W. Santa Fe Ave. after responding to these reports. Arriving officers found several victims trapped beneath the red Toyota Tacoma pickup, which drove up a sidewalk before it struck the pedestrians and hit a tree. The pickup truck sustained serious front-end damage and its airbags were seen deployed.

News reports say Good Samaritans and officers were able to lift the pickup truck to free a few of the victims who had been stuck underneath.

Officers began life-saving efforts to those who had been struck and transported 10 victims to local trauma centers with injuries ranging from moderate to life-threatening. Their age group range from 18 to 49 years old.

Twenty-two-year-old Solis, of Anaheim, was believed to be driving under the influence of drugs and was arrested for felony DUI causing great bodily injury.

Police stated there were hundreds of people on the sidewalk at the time, so they are relying on any video footage that any witness might have captured. Those who can help authorities are urged to call the Fullerton Police Traffic Bureau at (714) 738-5313.

Because drugs and alcohol can greatly affect our state of mind and judgment, never get behind the wheel if you are intoxicated. It is always best to rely on a safer method of transportation, instead. Avoid car accidents and hurting others by calling a sober friend or a taxi driver.

Turn to the Sweet Law Group to file your personal injury matter. We have competent and qualified litigators on board eager to help. If you are suffering a debilitating injury or facing financial distress, then seek prosecution against the at-fault party. We are highly trained in the legal justice system and helping clients recover. Our goal is to win your case and grant you full compensation for what you’ve lost. Schedule your free consultation and call (800) 203-3061.