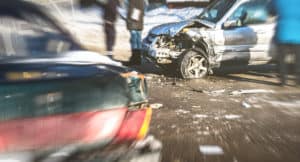 Authorities reported the collision around 10:00 p.m. First responders arrived to the area near Corbin Avenue shortly after.

A spokeswoman stated that a GMC SUV plowed into two dark-colored sedans for unknown reasons. Arriving officials found the SUV and one sedan with major front-end damage due to the impact. The other sedan also sustained side damage after being possibly broadsided.

According to fire officials, the accident injured four infants and three adults, five of whom suffered critical injuries.

Furthermore, it’s uncertain at this point what caused the cars to collide; however, investigators currently plan to further investigate. No more details have been given at this time.

Always pay attention whether you’re crossing the street or driving a vehicle. Because accidents can happen to anyone at any time, preparing for harm is a must to evade emergencies.

The Sweet Lawyers are experienced in a multitude of lawsuits involving personal injury and wrongful death. If you’re unable to cover any expensive medical or memorial costs, contact our firm today for additional steps. Our 40 years of experience has prepared us to tackle any size case involving car accidents or disability law. You can rest assured knowing that you won’t pay a dime until we settle your case. To get your case in motion, call (800) 674 7852.