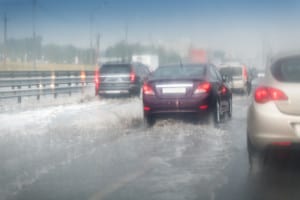 The incident happened just after 9 a.m. on September 24.

According to reports, the GMC Yukon driver was first reported by the employees inside a Lynnwood bank trying to open a locked lobby door while using his hands to mimic shooting people inside.

He then left with two children in the backseat after which he stopped at 196th Street SW near 40th Avenue.

Moreover, he then began driving east on 196th at high speed, rear-ending a pickup truck twice. It is still unknown if they were injured.

After crossing over I-5, he smashed into a Toyota 4Runner, sending that car several hundred feet into the intersection at 30th Avenue where it collided with a fourth vehicle. The Yukon ended up face down in a ditch.

Medics located the 4Runner, and the driver sustaining severe injuries. Also, the woman driving the car struck by the 4Runner was seriously injured. Both were hospitalized.

One of the two children in the Yukon was also taken to a local hospital in serious condition and expected to survive.

At this time, the 39-year-old driver of the Yukon was arrested and booked into the Snohomish County Jail for investigation of multiple counts of vehicular assault. It is unknown if the driver was impaired.

Why You Need a Personal Injury Attorney

Seeking compensation for your injuries after a serious accident can be very stressful, and takes up a lot of your time. Therefore, having a personal injury lawyer will provide you with the space and peace of mind you need to recover. Let our seasoned attorneys deal with the complex legalities of this case for you. We:

What are the seven important documents to possess after an accident?

You may also visit our website for testimonials and reviews from our clients. Do not hesitate to ask us anytime.

If you are involved in a similar car accident and suffered injuries from the incident, call our offices immediately at (800) 674-7852 so we can start your compensation claim, while you focus on your recovery and wellness. The aftermath of an accident can be traumatic and may change the lives of those involved for a long time. That is why having a personal injury lawyer is vital to fight on your behalf and ensure you receive the compensation you deserve. Our firm offers a free consultation and gives you options on how to proceed. Don’t worry, we do not ask for any silly “retainer,” or holding fees. Definitely no dime unless we settle your case.