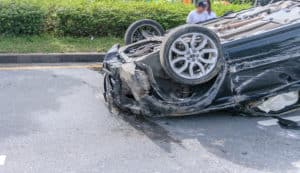 The incident occurred at about 4:22 p.m. near Vasquez Avenue. It involved a white van and a black Nissan Altima.

A witness told authorities that she noticed the white van pulled over to the right. However, it was not all the way over. As the witness passed the van, she said she saw it making a U-turn in her rearview. And then, she saw the black car flipping. The van reportedly stopped for a few seconds but it eventually sped away.

A man was able to exit the Nissan before emergency crews arrived. First responders transported him to a hospital as a precaution.

Meantime, firefighters had to extricate a 17-year-old male from the Nissan. Emergency crews airlifted him to a trauma center with unknown injuries.

Reports indicated that another witness followed the white van into Adelanto until the deputies made contact with the driver. However, it was not immediately known whether the driver received a citation.

Thousands of people are injured each year due to reckless driving. If you’re behind the wheel, pay full attention to the road and your surroundings. Do not engage in any non-driving activity which creates a potential distraction. You can help prevent an accident by abiding by all traffic laws and observing safety precautions.

If you or your loved one has suffered injuries in a car accident, reach out to the Sweet Lawyers. With over 40 years in the legal field, we know what it takes to protect your legal rights. Call our offices today at (800) 674 7852 for a free consultation at a location nearest you. Or contact us 24/7 by email, online chat, and text message.