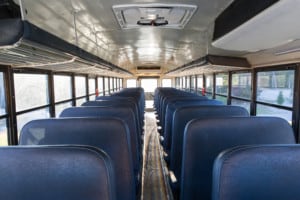 Police reported the collision at 12:20 PM on Canyon Drive near North Alvord Avenue. Officials stated that a large pickup truck carrying a trailer of plywood was traveling at a high speed when it rear ended a King County Metro bus. King County spokesman Jeff Switzer said the bus was complete stop in the bus zone when it was hit.

The metro bus sustained extensive damages to the rear near the engine.

A total of seven people were aboard the bus at the time of the accident, including the driver. Two of the passengers were transported to a nearby hospital due to the injuries they sustained.

The other occupants were evaluated at the scene and released. There has been no medical update on the driver and the injured passengers.

No more details surrounding the accident has been released to the public as investigations continue.

Always keep a safe distance between yourself and the vehicle in front of you. As a driver, it is your responsibility to be attentive to the road for other motorists at all times to prevent any dangerous accidents from happening. Larger vehicles, like buses, have less visibility than other vehicles so pay extra attention to the space around you.

If you or someone you love have been involved in a bus accident, call the attorneys at Sweet Law Group (800) 203-3061. With over 40 years of experience in the legal field, we have a team and the resources to win your personal injury case. Contact us today for a free over the phone consultation to answer any questions or concerns you may have at a location near you. We can also be contacted by email, online chat, and text message 24 hours a day/ 7 days a week.