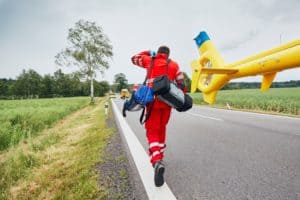 Trooper Heather Axtman said several witnesses called 911 and reported a Kia passenger car was driven erratically. It was possible that the car driver was DUI.

Axtman added that Troopers were trying to catch up with the said vehicle. Then at around 3:45 p.m. it crossed the center line and crashed head-on with another vehicle.

As a result of the accident, the driver of the other vehicle suffered a broken leg. Immediately, rescuers transported the driver to EvergreenHealth Monroe.

Meanwhile, both the Kia driver and his passenger were taken to Harborview Medical Center with serious injuries.

Authorities closed both directions of Highway 522 near the bridge Saturday afternoon while troopers investigated.

If you are or a family member is troubled in a similar hit-and-run crash and sustained injuries due to drivers’ negligence, call Sweet Lawyers right away at (800) 674 7852 and let our seasoned attorneys help you deal with the nitty-gritty of your case. We will provide you with our proven strategies that surely win your case. Because we sure don’t settle for less than you deserve. We will hold those at fault accountable. Please reach us by email and talk through our live online chat. Don’t worry, your consultation is free and confidential. Above all, we collect no fees unless we win.