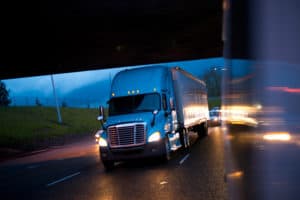 SPOKANE, WA (April 25, 2018) – A semi-truck crash on Interstate 90 blocked all the eastbound lanes and one westbound lane of the highway, early Wednesday morning.

According to witnesses, the semi-truck was hauling cars when it crashed near the area of the Lincoln and Division Street exits. In a statement given by Jim Martin Trucking LLC from Hayden, Idaho, the driver claimed that a silver Chevrolet cut him off, resulting in the semi-truck losing control and the chain reaction accident that followed.

Multiple people were reportedly hospitalized, but the Washington State Troopers confirmed that none of the people involved were seriously injured.

Affected areas were closed down to clear the remnants of the crash and tow the damaged vehicles. As of 3:22 PM on the same day, all blocked lanes were reopened to the public. Authorities have not released additional information to the public at this time.

Driving on highways requires a driver’s full attention and awareness. A small mistake or a hasty decision could lead to disastrous results and even death. It is a must to always drive defensively and stay alert to prevent any tragic accidents that may put yourself and others around you in danger.

If you or a loved one was injured on the road due to a negligent or an irresponsible act of a driver, contact the personal injury lawyers at Sweet Law Group. We have over 40 years of experience in the field, and know what it takes to win your case and achieve the justice and compensation that you deserve. Call (800) 203-3061 and arrange a free initial meeting with an experienced legal professional in your area. We are also available to clients through email, text message, and online chat.