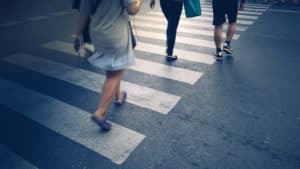 SEATTLE, WA (February 19, 2018) – According to Seattle Police, an unidentified man was hit and killed by a King County Transit but after falling into the street.

The incident occurred around 4 PM as the bus headed south on Aurora Avenue North approaching North 130th St., the male pedestrian stumbled of of the sidewalk and into the street. The man was hit by the bus as it approached the stop; he was pronounced dead at the scene.

The driver of the bus was evaluated by a Drug Recognition Expert officer; according to the policy for this type of accident. It was determined that the driver showed no signs of impairment.

Southbound Aurora Avenue North was shut down near 130th street while Seattle Police officers conducted their investigation. The identity of the deceased victim has not yet been released.

We at Sweet Law Group would like to extend our sincere condolences to the friends and family of the victim.

If you or someone you know has lost a loved one in a pedestrian accident, do not hesitate to contact the wrongful death lawyers at Sweet Law Group. Our experienced team can guide you through the legal process, and provide answers to your questions and concerns along the way. The dedicated professionals at Sweet Law have the experience and resources to achieve justice and recover the compensation that you and your family deserve. Call us today for a free case evaluation, at (800) 203-3061.