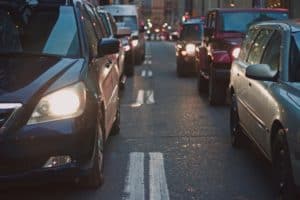 SANTA CLARITA, CA (February 8, 2019) – A woman was injured following a multi-vehicle collision Friday morning in Santa Clarita, according to the California Highway Patrol.

An incident log indicated at least three vehicles were involved, including a big rig that appeared to have spun around in the crash and was facing the opposite direction.

Two other vehicles appeared to have been pushed off the roadway and landed on its side. The front of a white pick-up truck was caved in.

A female occupant reportedly sustained a head injury as a result of the crash. It was not immediately known if the patient was treated at the scene or taken to a hospital.

The guard rail also looked visibly damaged at the scene of the collision, prompting road closure.

Details surrounding the collision were not made clear in the reports and media releases. CHP officials are still investigating the incident.

Almost all traffic accidents can be prevented by keeping a safe distance between each vehicle and by staying attentive to the roads at all times. Do not let cell phones or anything else distract you for even a split second. If the weather conditions get bad you must either drive more slowly and carefully, or get off the road completely. Staying alert and safe is the best way to avoid accidents.

Dealing with insurance companies after a traffic accident can feel exhausting. But armed with the right information, you can handle a claim yourself and save many thousands of dollars in the process. Consult an experienced personal injury attorney at The Sweet Law Group to make sure your legal rights are protected. We house legal professionals who have been handling accident cases for over 44 years. We are committed to helping victims recover with patience and respect as we strive to make the legal system attainable for everyone. Give us a call today at (800) 625-5052 and discuss your case with us free of charge.