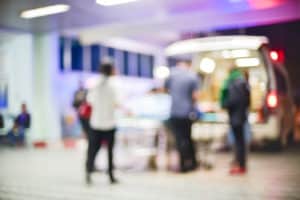 SANTA ANA, CA (March 3, 2018) –  A man was hospitalized after being involved in a pedestrian collision on Fairview Street on Saturday.

According to Cpl. Anthony Bertagna of the Santa Ana Police Department, the pedestrian was crossing the street at the intersection of Fairview Street and First Street in Santa Ana when a southbound car struck him.

The victim, described as being in his 20’s, sustained major head trauma and was rushed to a local trauma center. He underwent surgery on Saturday evening and was reported to be in critical condition on Sunday.

The driver remained at the scene and cooperated with officials. Investigation continued Sunday afternoon to discover the cause of the accident.

Driving on main roads is always risky and requires the driver’s full attention. One small mistake could lead to disastrous results and may end up hurting the driver and other motorists or pedestrians in the area. It is a must to always drive defensively and stay alert to prevent any tragic accidents that may put yourself and others around you in danger.

If you or a loved one has been injured in a pedestrian accident due a negligent or irresponsible driver, contact the personal injury lawyers at Sweet Law Group. We have over 40 years of experience in the field, and know what it takes to win your case and achieve the justice and compensation that you deserve. Call (800) 203-3061 and arrange a free initial meeting with an experienced legal professional in your area.