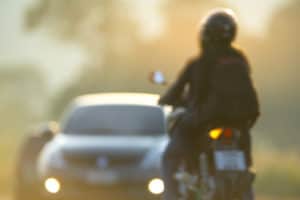 SAN DIEGO, CA (May 12, 2018) – A 26-year-old man was seriously injured on Saturday evening, following a motorcycle collision that took place on Fifth Avenue.

As per witness statements, the collision happened around 9:30 PM at the intersection of Fifth Avenue and Ash Street. A motorcycle was going through a green light when a 2007 Nissan Xterra, driven by 82-year-old Herbert Green, entered the intersection on a red light.

The impact of the collision ejected the rider, throwing him onto a parked vehicle, where he hit his head. Green reportedly did not stop after the crash and continued to travel northbound. He was eventually stopped at a DUI checkpoint that was being conducted by the San Diego Police Department, near the site of the crash in the 1500 block of Fifth Ave.

Green was detained and arrested for felony hit-and-run, while the motorcyclist was rushed to the hospital in critical condition with severe head injuries. There is no update on his current condition. No additional information regarding the case is available to the public at this time.

When driving, it is crucial to always be careful of motorcyclists, pedestrians, and bicyclists on the road. Motorcycle accidents are extremely dangerous because of their lack of protection and lightweight bodies. By paying attention to your surroundings and driving within the speed limit, dangerous accidents can be prevented.

If you or a loved one was injured in a motorcycle accident due the negligent or irresponsible driving of a reckless driver, contact the personal injury lawyers at Sweet Law Group. We have over 40 years of experience in the field, and know what it takes to win your case and achieve the justice and compensation that you deserve. Call us at (800) 203-3061 for a free case evaluation by a legal professional in your area. You can also reach us 24 hours a day/ 7 days a week by online chat, text message, and email.