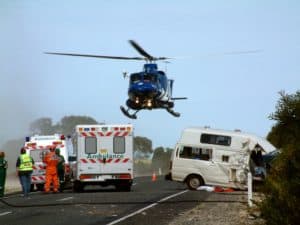 The incident began at about 6:00 p.m. at East California Avenue and Dr Martin Luther King Jr Boulevard. According to police reports, a woman drove for a man who was stabbed in the 900 block of Dolores Street.

However, the woman failed to yield at a red light and crashed with the ambulance.

The authorities confirmed that no one suffered serious injuries from the crash. Meanwhile, the stabbing victim suffered moderate stab wounds. Responders took him to a hospital and the police continue to investigate the stabbing incident on Dolores Street.

Officials confirmed that responders were taking a man to a hospital by Hall Ambulance during the collision.

If you feel yourself unable to drive, you can always contact a Lyft or Uber instead.

Mark Sweet, an award-winning attorney, has handled many personal injury cases. He wants to let those who are injured know that it’s important to have an independent investigation after an accident to better protect their rights.

If you are involved in a similar car accident or have suffered injuries, turn to us. We have been pursuing justice for over 40 years, and know how to proceed in tough legal situations like these. Thus, let our team of experts get you the compensation your family deserves. We value your trust, therefore we collect no silly retainer fees. Call our offices now at (800) 674-7852 to receive a free consultation with a professional.