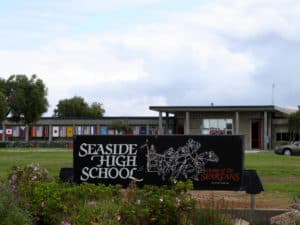 The teacher was Dennis Alexander, an employee school district since 1994, and a reserve police office for the Sand City Police Department for the past seven years. He was teaching a course about gun safety for an Administration of Justice class, filled with 32 juniors and seniors.

He was about to do a demonstration of how to disarm someone and wanted to make sure that the gun wasn’t loaded, when the gun went off. Luckily, it was point towards the ceiling when it was fired. Pieces of the ceiling fell down from the shot.

Seaside Police Department officers reported that no one suffered major injuries, but a 17-year-old boy sustained moderate injuries, while two other students were hit by debris. The boy’s father, Fermin Gonzales, said that fragments of the bullet ricocheted off the ceiling and into his son’s neck. They took him to the hospital for evaluation and X-Rays, when seeing blood on his shirt upon arriving home.

Alexander was placed on administrative leave from his teaching position and the Police Department. He has since apologized for the accident. Officials are looking into why he had a loaded gun in the classroom.

Teachers are not legally allowed to have firearms in California classrooms. According to the Monterey Peninsula Unified School District spokeswoman, Marci McFadden, Alexander was not authorized to have a gun on campus. Parents and officials alike are left with many questions.

Thousands of students at hundreds of schools nationwide participated in the School Walkout on Wednesday morning. This was a 17-minute walk out, one minute for each of the 17 people killed at Florida’s Marjory Stoneman Douglas High School shooting from one month ago.

Each campus or student group had different ways of expressing their stance on gun violence. Some students laid down on football fields to spell out #Enough, others chanted and waved prepared signs and rallied in front of government buildings (including the White House). Some students spontaneously rallied out of the campus after the walkout, while others sang or filed quietly in a silent protest. One campus read out the names of children and adults that were murdered in school shootings.

Adults and smaller children also participated in these marches. Some wore orange, the color associated with the hope for a future free of gun violence. Many celebrities and politicians, including Barack Obama, have participated in this movement. Wear Orange was founded by the parents of Hadiya Pendleton, who was shot and killed in Chicago at the age of 15.

The walkouts were posted and shared on social media using a variety of hashtags including #NationalSchoolWalkout and #Enough. News stations also covered the walkouts, bringing awareness to the three key actions students are demanding from Congress: banning assault weapons, requiring universal background checks before allowing the purchase of a gun, and passing a gun violence restraining order law (this would allow courts to disarm people who display warning signs of violent behavior.

If you or your child have been injured in an accident involving gun violence, contact the personal injury lawyers at Sweet Law Group. Our experienced attorneys and professional legal team will fight, day and night, until we achieve the compensation and justice that is owed. Call our offices at (800) 203-3061 for a free consultation at a location near you. We can also be reached by email, text message, and online chat, and are available to our clienets 24 hours a day/ 7 days a week.