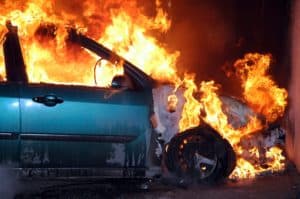 REDONDO BEACH, CA (January 14, 2019) – A man died Saturday morning after his vehicle crashed into a utility pole and then engulfed into flames in Redondo Beach.

According to the Redondo Beach police, the incident occurred at around 7:05 a.m. Saturday. It was reported that a vehicle struck a utility pole and burst into flames in the 1600 block of Aviation Boulevard.

Officials said the excess fuel of the vehicle ignited and then flowed down the decline of Aviation Boulevard for approximately 100 feet. Redondo Beach firefighters responded to put out the flames and rendered aid to the motorist whose identity was not immediately released. The victim was pronounced dead at the scene.

Southern California Edison also dispatched some personnel to the scene to repair the damaged pole and reroute power.

The crash prompted officials to close Aviation Boulevard between Artesia Boulevard and Grant Avenue from 7:05 a.m. to about 3 p.m.

The investigation is ongoing. Anyone who witnessed the crash is urged to call Traffic Investigator Clint Daniel at (310) 379-2477, extension 2721.

If you are looking for reliable car accident attorneys, reach out to Sweet Law Group. We have over 40 years of experience in the legal field, and we know what it to win your case. Our attorneys and professional legal team have dealt with cases including car accidents, wrongful death, personal injury, and disability. Untiringly, we will fight to help you achieve the justice and compensation that your family deserves. Call now for a free consultation at (800) 203-3061 to speak to an experienced legal professional in your area. We can also be contacted 24 hours a day/ 7 days a week by email, online chat, and text message.