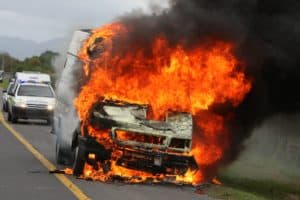 According to the California Highway Patrol, the collision took place at approximately 11:38 PM, just south of Salinas Road. Based on their report, two vehicles were involved in the incident. Both cars caught fire in the incident.

The paramedics were called for needed medical attention. They confirmed that serious injuries were sustained by the involved motorists.

Major damages were also recorded at the scene. A SigAlert was issued while a clearing operation was conducted in the area. An investigation is ongoing to determine the cause of the accident.

Negligence can lead to a dangerous car crash causing injuries and damages. By driving safely and abiding all traffic laws, you can ensure your safety and the safety of surrounding vehicles, motorists, and pedestrians. Do not get behind the wheel if you find yourself under the influence of drugs or alcohol.

Reach out to the experienced lawyers at Sweet Law Group if you are involved in a car crash. We have over 40 years of experience in the legal field, and we know what it takes to win your case. Our attorneys and professional legal team have dealt with cases including car accidents, wrongful death, personal injury, and disability. Untiringly, we will fight to achieve the justice and compensation that you and your family deserve. Call our offices at (800) 203-3061 for a free consultation with a professional in your area. We can also be contacted by email, online chat, and text message 24 hours a day/ 7 days a week.