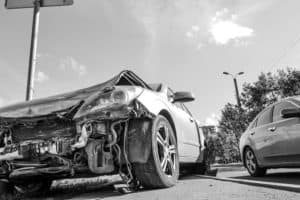 The incident was reported just after 7:50 AM when a deputy stopped a vehicle and made initial contact with the driver. As the deputy returned to his motorcycle, the vehicle sped away. According to the Sheriff’s Office’s spokeswoman, the 24-year-old male driver swerved around a truck and collided with a passenger vehicle in the oncoming lane, before fleeing from the scene on foot.

Snohomish County Sheriff’s Office Collision Investigation Unit arrived at the crash site. Deputies set up a containment area and a K-9 team also arrived at the scene for assistance, but the suspect got away.

A man and a woman who were in the oncoming vehicle were injured and transported to a local hospital by emergency responders.

Authorities were forced to close down Larch Way for several hours during their investigation. The sheriff’s office also said that Martha Lake Elementary and Alderwood Middle School were put on lockdown while police searched for the suspect.

Unfortunate road accidents can happen anywhere and to anyone. One small mistake could lead to disastrous results, so stay in your lane and follow road rules and regulations. It is important to drive defensively and always abide by all driving laws to ensure your safety and the safety of surrounding vehicles, motorists, and pedestrians.

If injured in a hit-and-run car accident incident, contact the experienced personal injury lawyers at Sweet Law Group. We promise to work for you, day and night, until we achieve the proper compensation and justice that you and your family deserve. Call our offices at (800) 203-3061 for a free consultation, and discuss your case with a legal professional in your area. We can also be contacted 24 hours a day/ 7 days a week by email, online chat, and text message.