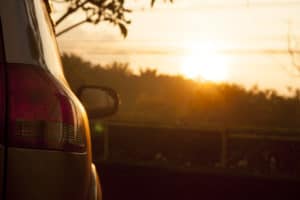 Lucille Lu, 18, was identified on Monday by the Ventura County Medical Examiner’s office. She was sitting passenger in a 2004 Ford SUV that had two other 18-year-old females from Orange County.

The driver was traveling north in the left lane of the 101 , when for unknown reasons, swerved left into the dirt center median. She then turned the steering wheel right, passing all lanes to the right shoulder, and hitting the side of a steep hill. The Ford flipped and rolled down the hill into a drainage culvert, where it came to a stop on its roof.

Lu was not wearing a seatbelt and was pronounced dead from injuries sustained in the crash. The driver, from Placentia, and second passenger, from Westminster, were wearing seatbelts and suffered major injuries. Both were transported to the Ventura County Medical Center for medical treatment. The identities of the teen survivors have not yet been released.

The northbound lanes of the highway were temporarily closed for a rescue helicopter and investigation by authorities.

A GoFundMe page was setup to help the family with funeral expenses.

Heartfelt condolences to the family and friends of Lucille Lu. May she rest in peace.

Sweet Law Group has over 40 years of experience in the legal field, and will fight to achieve the justice and compensation that you and your family deserve. Our attorneys and professional legal team have dealt with cases including car accidents, wrongful death, personal injury, and disability. Call us now at (800) 203-3061 for a free consultation, and discuss your case with a professional near you.