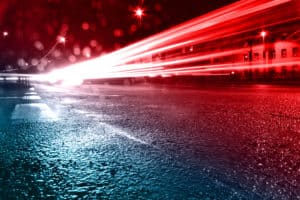 According to Sheriff’s spokeswoman Mara Rodriguez, witnesses revealed that the quad drove through the parking lot while speeding. Then, it crashed with a motorcycle.

Several witnesses confirmed that the quad drove at a high rate of speed before the crash. Tammie Mauro stated, “We were at Texas Roadhouse and twice a group of dirtbike riders and one guy on a quad drove by revving really loud.”

“We were at Pancho Villas when they all rode by acting stupid, raising their arms, and revving the motors! I pray he is ok and hopefully they all learned a lesson! We ride but not like that!” witness Deanna Chant said.

Rodriguez said the impact with the motorcycle was minimal but caused the quad driver to lose control and hit the passenger side of a van parked at Jonny Carrino’s.

“The impact was severe enough to cause extensive damage to the impacted area of the van and deploy the van’s airbags,” Rodriguez added. “The driver of the quad suffered major injuries and was airlifted to a trauma center.”

Getting behind the wheel is one of the most dangerous things we can do. Furthermore, it’s a responsibility that should not be taken lightly. By keeping a safe distance from other drivers, paying attention to your surroundings and driving at a controlled speed, you can focus on the task at hand. These driving tips will make a difference and save lives.

Thousands of people across California suffer injuries in traffic collisions every year. Thus, knowing that you hire the right firm, that has the resources to spend, can make all the difference in getting the right compensation for a client.

If interested in filing a claim for an auto accident case, call Sweet Lawyers at (800) 674 7852. Our firm takes on personal injury, wrongful deaths, disability, and car accident cases of every kind. We know that an accident can set you back financially, and cause you distress and trauma. Furthermore, we vow to stay on your side the entire way through your legal battle. Above all, we aim to get you the justice and compensation you are rightfully owed. For your convenience, you can also reach us through online chat and email 24 hours a day, 7 days a week.