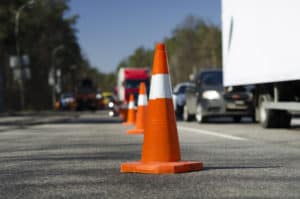 The collision occurred around 12:47 PM at the intersection of Manchester Boulevard and Normandie Avenue. The scene was on the border of the neighborhoods of Manchester Square and Vermont Knolls.

The bicyclist, identified as Frederick Frazier, was found in the area and taken to a local hospital where he was later pronounced dead. A photo taken after the crash shows a white bike in the street with its handlebars and back wheel missing, and other debris scattered across the street behind it.

It is suspected that the hit-and-run vehicle is a Porsche SUV, with damages from the crash. Authorities are still searching for the hit-and-run driver who fled the scene. Anyone with more information about the incident is urged to contact LAPD detectives at (323) 421-2500 or submit an anonymous tip at (800) 222-8477. There is a $50,000 reward for information leading to the arrest and conviction of Frazier’s killer.

A GoFundMe page was set up to help Frazier’s family with funeral expenses. Click on the link to donate.

We at Sweet Law Group offer our deepest sympathies to the family and friends of Frederick Frazier, also known as “Woon” by his loved ones. May he rest in peace.

If a loved one was wrongfully killed on the road in a hit-and-run collision, contact the wrongful death lawyers at Sweet Law Group. We have over 40 years of experience in the field, and know what it takes to win your case and achieve the justice and compensation that you deserve. Call our offices at (800) 203-3061 for a free consultation with a professional in your area. We can also be contacted 24 hours a day/ 7 days a week by email, online chat, and text message.