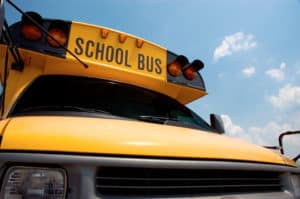 COACHELLA, CA (March 2, 2018) – On Friday morning around 7:45 AM, an accident involving a school bus and sedan occurred on Calhoun Street just north of Avenue 48.

A school bus was traveling to the Valle Del Sol Elementary School in Coachella, when hit by a 4-door sedan. Edgar Lopez of Indio was speeding in a 2007 Infiniti G37 on Calhoun, when he lost control and crossed the centerline, hitting the school bus head-on. The bus, driven by 34-year-old Elizabeth Lozano of Indio, overturned from the impact.

Both Lopez and Lozano suffered major injuries and were transported to the Desert Regional Medical Center in Palm Springs. An adult passenger in the bus sustained minor injuries in the accident, and none of the three students on board were injured.

Calhoun St was closed between 48 and Doctor Carreon Blvd for about 4 hours while officials investigated the scene of the crash. California Highway Patrol Officer Mike Radford said that all persons in the bus were wearing seatbelts; Lopez was not. Lopez was seen speeding and passing multiple cars prior to the accident.

It is important to abide by the rules of the road when behind the wheel. This includes remaining in the designated speed limit, following traffic signs, and using turn signals when traveling to another lane. Keep yourself and others safe by following proper driving practices.

If you have been injured in an auto accident due to the reckless driving of another driver on the road, contact the personal injury lawyers at Sweet Law Group. With over 40 years of experience, our attorneys and professional legal team know what it takes to win your case. Call our offices, day or night, at (800) 203-3061 for a free initial visit at a location near you.