Home » DENVER, CO – One Killed and One Arrested in Fiery Two-Car Collision on Quebec Street 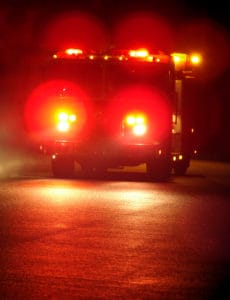 DENVER, CO – One Killed and One Arrested in Fiery Two-Car Collision on Quebec Street

DENVER, CO (March 6, 2018) – A fiery and fatal car accident took place on Quebec Street near the intersection with Interstate 70, on Tuesday night around 9:30 PM.

One of the two cars involved in the incident caught on fire, trapping one person inside. Firefighters and police officials did everything they could to remove the victim from the flames, but the person was pronounced dead on the scene.

Another person in the other vehicle jumped out of the car and tried fleeing from the scene. Officers were able to take the man into custody.

Both directions of Quebec were shut down for investigation and cleanup of the wreckage. There is no further information on the cause of the accident, or the people involved.

Sincere sympathies to the family and friends of the victim in this tragic crash.

If you have been involved in a car accident, it is important to have strong legal representation on your side. Sweet Law has over 40 years of experience in the field and has dealt with cases including wrongful death, auto accidents, and personal injury. Call our offices at (800) 203-3061 and arrange a free first visit with a professional in your city. We can also be reached 24 hours a day/ 7 days a week by text message, online chat, and email.