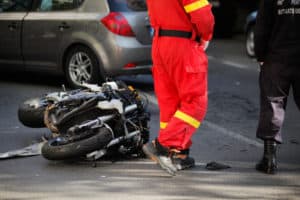 According to reports, a motorcycle and vehicle collided on February 28. Paramedics transported the unidentified motorcyclist with life-threatening injuries to a nearby hospital for further treatment.

The San Diego Police Department said the incident occurred around 11:10 p.m. The motorcycle rider allegedly failed to yield to officers near Garnet Avenue and Jewell Street. As a result, officers began the pursuit.

As a result of the impact, the motorcyclist suffered a life-threatening brain bleed that required immediate surgery. Meanwhile, the 62-year-old driver of the Prius and his passengers remained uninjured.

The identity of the rider unreleased as of this time. However, further details will soon be released.

Weaving in and out of lanes is always dangerous. Be cautious when changing your lane and be aware of the presence of other motorists around you. Moreover, consider small vehicles like motorcycles because these are more prone to road accidents than bigger vehicles.

If you or a loved one sustained injuries in a motorcycle accident due to negligent or irresponsible driving of a reckless driver, contact the personal injury lawyers at Sweet Lawyers. We have over 40 years of experience in the field. We know what it takes to win your case and achieve the justice and compensation that you deserve. Call us at (800) 674 7852 for a free case evaluation by a legal professional in your area. You can also reach us 24 hours a day and 7 days a week by online chat, text message, and email.