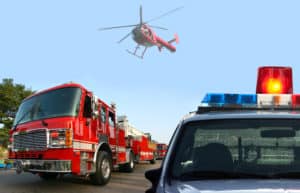 The officials said the accident occurred at about 4:06 p.m. Involved was a 1999 Ford Explorer. An investigation showed that a 42-year-old man from Antioch was driving northbound on Kelbaker Road at a high rate of speed. For inexplicable reasons, he made an unsafe turn that caused the Ford to veer off the roadway.

The vehicle subsequently entered the open desert terrain east of Kelbaker. It flipped several times, burst into flames, and then rested on its wheels.

The force of the rollover crash ejected the front-right passenger and the driver from the vehicle.

The officers said the passenger, a 43-year-old San Jose man, died at the scene. On the other hand, the driver died at Sunrise Hospital in Las Vegas, NV where he was transported. Both of them were not wearing seatbelts at the time of the crash based on the investigation.

The 54-year-old Pahrump, NV man sitting at the right rear of the vehicle sustained minor injuries.

The CHP Barstow Area is handling the investigation and not suspect that drugs or alcohol as factors. They also urge anyone with information to call them at 760-255-5900.

Our most heartfelt condolences to the loved ones of the victims.

If a loved one has been killed in a car accident, reach out to the Sweet Lawyers as soon as possible. We understand the death of a loved one can take a toll on your well-being. We will commit our resources and years of experience to bring justice for your loss. Call our hotline at (800) 674 7852 to speak with one of our attorneys free of charge. Additionally, you can contact us 24/7 by email, online chat, and text message.