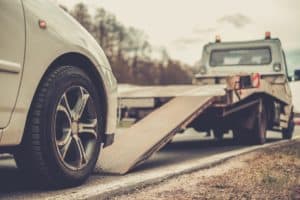 Trooper Rick Johnson revealed that the crash on northbound lanes near the West Seattle Bridge exit about 7:00 a.m. involved four cars. Due to the crash, a WSDOT worker responded to the scene to help clean the debris. However, a passing empty car hauler trailer that was being pulled by a white truck hit them in the leg.

According to Trooper Johnson, the truck driver didn’t pull over to check what happened. Meanwhile, the medical responders transported the injured WSDOT worker to Harborview Medical Center for treatment of a possible broken leg.

The initial crash led authorities to shut down two lanes. Reports also revealed that the initial crash resulted in minor injures. However, the roadway has since reopened to traffic.

As the police continue to investigate the collision, Johnson encourages anyone who has information about the crash or the truck driver, to contact the Washington State Patrol. Johnson also said that it’s probable that the truck driver didn’t notice that he hit the WSDOT worker.

May this incident be a reminder for all motorists to drive responsibly. Drivers should also keep in mind that distracted driving, speeding, and failing to yield will lead to dangerous road accidents. It is always important to drive defensively and abide by all driving laws. By doing so, you can ensure your safety and the safety of surrounding vehicles, motorists, and pedestrians.

If you or a loved one has been involved in a car accident, call the attorneys at Sweet Lawyers. We are here to help you carry the burden this case has caused you and your family. With over 40 years of experience in the legal field, we know what it takes to win your auto accident and personal injury cases. We will do the best we can to achieve the justice and compensation that you and your family deserve. Call our offices at (800) 674 7852 for a free consultation with a professional in your area.