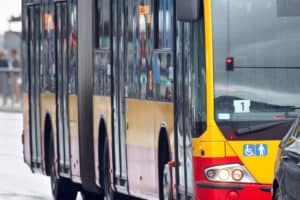 LOS ANGELES, CA (February 27, 2019) – A woman was killed after she was struck by a Metro bus in the Mid-Wilshire area of Los Angeles early Tuesday. Officials said she was Hispanic and in her 50’s.

According to the bus driver, the woman was initially sitting at the bus stop before she stepped out onto the street and was hit. One bystander reportedly tried to help the victim.

Emergency crews responded just before 12:30 a.m. to the 4400 block of Wilshire Boulevard near South Rossmore Avenue and found the victim. The woman was pronounced dead at the scene after the paramedics performed CPR. The victim’s name was not immediately released.

The cause of the fatal crash is still being determined by the Los Angeles Police Department’s West Traffic Division.

Reach out to the experienced lawyers at Sweet Law Group when involved in a serious traffic accident like a pedestrian collision. We have over 40 years of experience in the legal field, and we know what it takes to win your case. Our attorneys and professional legal team have dealt with cases including pedestrian accidents, wrongful death, personal injury, and disability. Untiringly, we will fight to achieve the justice and compensation that you and your family deserve. Call our offices at (800) 203-3061 for a free consultation with a professional in your area. We can also be contacted by email, online chat, and text message 24 hours a day and 7 days a week.