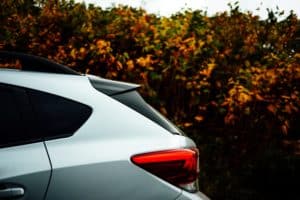 Baby Inside SUV During Crash on Saticoy Street

Van Nuys, CA (December 4, 2020) – On Wednesday, a woman and a baby were inside an SUV during a crash on Saticoy Steet and Gloria Street.

A utility vehicle traveling at a fast speed down the street before crashing with a black SUV. As a result, the SUV spun around and plowed into a fence near an apartment complex.

After the crash, people inside the apartment complex removed the woman from the vehicle. She had a car seat next to her with a baby inside.

Good thing, the baby didn’t appear to be injured. But, rescuers still took the baby to the hospital via ambulance.

HP said the woman and her infant son were rushed to the hospital and are expected to survive.

The chase started in the Redlands area when the driver stole the truck from a roofing crew at a commercial building.

“The guy who stole the truck climbed up their ladder, took the keys from a work bag, jumped down off the roof, and took off with the truck,” a witness said.

Furthermore, Valstein Pfeifle, the owner of the roofing company said his anti-theft tracking app, called “Samsara,” clicked on and provided him real time GPS coordinates as he chases his truck.

Also, the app gave him a camera view of the man driving the vehicle.

Pfeifle followed the suspect while in contact with California Highway Patrol officers. He arrived on the scene right after the incident.

Moreover, CHP said it is an absolute miracle that nobody was seriously injured or killed.

Police arrested the driver he ran from the utility truck.

Always be a defensive driver.

A common misconception is that personal injury lawyers don’t care. That is simply not true. Injury lawyers care about and want justice for their clients. Also, we are driven by the desire to make our clients whole again,” says Steve Baric of Sweet Lawyers.

Call Sweet Lawyers if you or a loved one has recently been involved in a similar accident, you do not have to face the aftermath alone. Our attorneys will guide you through every step of the way. Also, we are here to assure that you receive the justice and compensation that you deserve. Call our offices today at (800) 674 7852 for a free consultation with a professional.