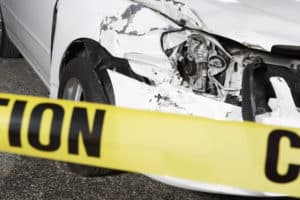 The fatal crash happened on December 2 at about 10:10 p.m. on Broadway and West Wabash Avenues.

Eureka Police Department responded to the scene after receiving reports of an injury crash. In a report, the crash involved a white sedan and a white pick-up both still in the intersection when the police arrived.

According to the preliminary investigation, both vehicles were stopped at a red traffic light. The sedan was northbound on Broadway at West Wabash Avenue and the pick-up was eastbound turn lane of southbound Broadway.

When the traffic light turned green for the pick-up, the sedan also started driving northbound into the intersection. As a result, both vehicles crashed head-on.

One person performed CPR on the 62-year-old driver of the sedan who was on the ground after the crash. Officers then took over and transported the woman to St. Joseph’s ER where she later died.

Humboldt County Coroner’s Office is withholding the release of the deceased victim’s identity, pending notification of next-of-kin. Furthermore, it is unknown whether drugs, alcohol or an underlying medical condition contributed to her involvement.

Meanwhile, the pick-up driver did not sustain any injuries from the crash. Officers evaluated the driver and later concluded that neither drugs nor alcohol was a factor in her involvement in the collision.

Moreover, the investigation of the incident and the cause of death remains on-going. Anyone with information regarding the crash is encouraged to contact Det. Corrie Watson at (707) 441-4032.

You can seek help from the experienced lawyers at Sweet Lawyers when involved in a serious traffic accident like a multi-car crash. We have over 40 years of experience in the legal field therefore, we know what it takes to win your case. Our attorneys and professional legal team have dealt with cases including wrongful death and personal injury. We will fight to achieve the justice and compensation that you and your family deserve. Call our offices at (800) 203-3061 for a free consultation with a professional in your area. In addition, you can also reach us by email, online chat, and text message 24 hours a day and 7 days a week.