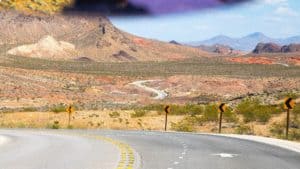 The two-vehicle accident happened around 10:30 p.m. Dispatchers arrived to the area shortly after.

According to reports, an eastbound gray 2018 Toyota Prius tried to make a left turn into the Circle K, located at the intersection. There, the driver eventually collided with a westbound white 2018 Ford Fiesta.

The Ford was only occupied by the driver, 33-year-old Nicole Packer, of Morongo Valley. However, four occupants were inside the Toyota at the time.

The driver of the Prius, 49-year-old Colin Campbell of Los Angeles, suffered major injuries as a result of the impact.

The passengers in the back seat, aged 14 and 17, suffered major injuries due to the impact.

According to reports, the 17-year-old girl succumbed to her injuries around 12:10 a.m., on Thursday. However, her name has not been released.

Emergency responders rushed the driver of the Prius and his passenger to Parker Desert Regional Medical Center for further treatment.


According to CHP reports, Packer traveled at a high rate of speed prior to the collision. She sustained major injuries, and was later arrested her for driving under the influence causing injury, a felony.

Our deepest thoughts and prayers are with the loved ones of the deceased victims during this difficult time.

Receive second-to-none legal representation from the Sweet Lawyers. Our law group had more than four decades of practice. We’ve settled more than $200 million dollars in lawsuits related to wrongful death and personal injury. If you believe you may have a case and would like to pursue it, call (800) 674 7852. No client of ours deserves to settle for the unsettling circumstances that stem from the death of their loved one.