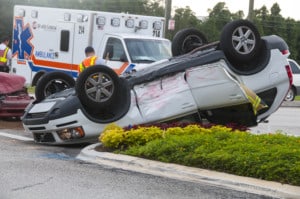 The crash happened around 4:06 p.m. on southbound 15 Freeway north of Kelbaker Road.

According to the CHP, a 1999 Ford Explorer, driven by a 42-year-old Antioch man, was traveling at a high rate of speed. It then made an unsafe turning movement, causing it to leave the roadway and enter an open desert terrain.

Upon entering the open desert, the SUV overturned multiple times and caught fire before coming to rest on its wheels. As it rolled over, the driver and his right front passenger, a 43-year-old San Jose man, were ejected from the vehicle.

As a result, that passenger sustained fatal injuries and died at the scene.

The driver of the Ford was airlifted to Sunrise Hospital in Las Vegas, Nevada, where he also died.

Both the two deceased were not using their seat belts.

Alcohol and/or drugs were not being ruled out as factors in the crash, which remains under investigation.

We would like to extend our deepest condolences to the loved ones and friends of the victims during this delicate moment.

If you have lost a loved one in a car accident, please contact the Sweet Lawyers today. It is our goal to provide your loved one the highest quality of legal representation. Our team is dedicated to helping your bereaved family obtain both justice and maximum settlement. Our seasoned wrongful death attorneys will fight by your side and get what you rightfully deserve. Call us for your free consultation at <(800) 674 7852.