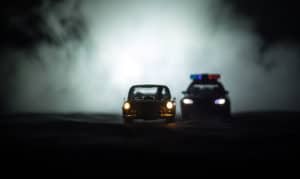 TARZANA, CA (May 23, 2019) — A dangerous police chase crash occurred through the San Fernando Valley in Tarzana on Tuesday, May 21.

According to the California Highway Patrol, the police chase began around 7 p.m. in Santa Clarita when authorities tried to pull over the aged recreational vehicle on Towsley Canyon Road. The RV weaved in and out of traffic at a high rate of speed and sustained extensive damage.

There appeared to be at least two dogs inside the RV during the chase. At one point, a dog was seen jumping out of the moving vehicle onto Victory Boulevard at Topham Street in the Winnetka neighborhood. The dog instantly got up and went off the road.

Another dog was later seen in the front seat.

The driver collided into a black vehicle at the 101 Freeway off-ramp at Tampa Avenue but continued on.

At about 7:30 p.m., the driver eventually lost control of the vehicle. It collided into a sedan and struck a tree at Tampa Avenue and Wells Drive in Tarzana. The female driver then ran from the vehicle on foot.

The dog that was inside the vehicle at the time of the incident was then seen running with a heavy limp. The dog followed close behind the fleeing driver.

The driver tried to jump the gate of a residence, however, officers tackled her.

An occupant of the sedan lay injured on his back in the driveway of the home near the collision. Paramedics brought him to a local hospital in unknown condition.

The suspect also suffered unknown injuries. First responders treated her at the scene. Her identity his not immediately available.

The Sheriff’s Department originally called the vehicle simply a stolen RV. Yet, Cmdr. Ritchie Lew with Simi Valley Police Department later stated that the RV was believed to have been purchased using a stolen identity at Giant RV in Downey. The investigation of the incident is ongoing.

Strictly follow the rules of the road to ensure everyone’s safety. When pulled over, slow down and wait for further instructions. Do not attempt to flee the scene and cooperate with the authorities.

If a loved one has suffered injuries in a police chase crash caused by a reckless driver, reach out to the experts at Sweet Lawyers. With over 40 years of experience in the legal field, we know what it takes to win your personal injury case. Call our offices today at (800) 674-7852 for a free consultation with a professional in your area. For your convenience, we can also be contacted by email, online chat, and text message 24 hours a day/7 days a week. Day and night, we will fight to help you get the compensation you deserve.