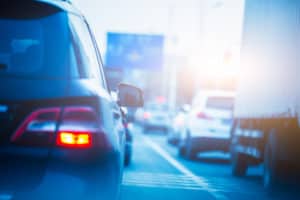 According to the California Highway Patrol, the collision took place shortly before noon, near Pedley Road. A Cadillac SUV was heading west on the freeway when it exited at Pedley and turned onto the ramp from the eastbound side.

As the SUV was driving up the ramp, a semi-truck was getting ready to exit. In an attempt to avoid the oncoming vehicle, the semi-truck driver swerved to the left before clipping the SUV and slamming into the center divider.

The tractor-trailer came to a stop sideways and blocked most of the freeway. About 30 gallons of fuel spilled onto the freeway, lengthening the clearing operations. Affected areas were later reopened approximately three hours after the crash.

Paramedics responded to the scene and rendered aid to the drivers involved in the wreck. Both of them sustained minor injuries, but it was not immediately known whether they were hospitalized. Their identities and cities of residence were not disclosed.

An investigation is ongoing to determine the cause of the collision and other possible contributing factors. No other information has been released to the public at this time.

Road accidents can happen anytime, anywhere, and to anyone. One small mistake when driving can lead to disastrous results. It is important to drive defensively and always abide by all driving laws, to ensure your safety and the safety of surrounding vehicles, motorists, and pedestrians.

If you or a loved one has been injured in an accident on the road caused by a reckless driver, contact the personal injury lawyers at Sweet Law Group. We have over 40 years of experience in the field, and know what it takes to win your case and achieve the justice and compensation that you deserve. Call us at (800) 203-3061 now, for a free case evaluation by a legal professional in your area. You can also reach us by online chat, text message, and email.