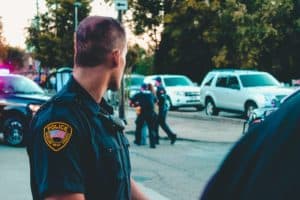 Reports revealed that the crash occurred just after 10:45 a.m. on San Ramon Valley Boulevard. The police stopped the chase when the vehicle they were following drove into opposite lanes of traffic at Town and Country Drive.

Afterward, the vehicle struck another car before crashing into a tree.

A pedestrian also sustained minor injuries due to the debris scattered from the crash. Responders treated him at the crash scene.

The authorities later revealed that Danville officers chased a purple 1992 Lexus LS400 as it drove north on San Ramon Valley Boulevard. Initially, the CHP pursued the speeding Lexus on 680 Freeway. Then, the vehicle exited at Sycamore Valley Boulevard.

When they noticed that the Lexus headed south on Camino Ramon, the CHP stopped the crash. However, the Lexus lost control right after Danville police ended their chase.

According to a statement, Danville police revealed that they detained 42-year-old Tramayne Baker on suspicion of felony evasion.

Responders transported Baker to John Muir Medical Center in Walnut Creek for treatment of his unspecified injuries. Furthermore, he was not conscious when an ambulance transported him.

The National Highway Traffic Safety Administration (NHTSA) reported that two out of three vehicle drivers will take part in an injury accident during their lifetime. Moreover, in the event of a collision itself, it’s important to remain calm. By doing so, you can properly handle the immediate aftermath of the incident.

Report an incident to the authorities and seek medical attention if you suffer injuries in a crash. Then, turn to an experienced personal injury attorney from Sweet Lawyers.

“We can secure evidence in your favor and request additional information. We will get vital eyewitness accounts, and review insurance coverage you are entitled to that may not be common knowledge. You need an experienced attorney who will fight on your behalf. Someone standing with you at such a delicate time in your life will make all the difference,” says Mark Sweet, a personal injury attorney at Sweet Lawyers.

If you or a loved one has recently been involved in an accident, hire an experienced personal injury lawyer. They can help you achieve justice and receive compensation. Sweet Lawyers have been handling accidents and getting compensation for injured victims for over forty years. We do not stop until you get fair compensation for financial loss, wage loss, and property damage. Call us today at (800) 674 7852 to discuss your legal options.