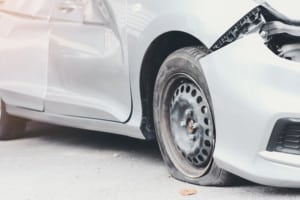 Man Flees After Crashing Stolen Car With Child Inside in Puyallup

PUYALLUP, WA (April 26, 2019) – A car thief crashed a stolen vehicle with a child inside at South Meridian and 43rd Avenue Southwest early Wednesday.

According to Pierce County Sheriff’s officials, a man contacted 911 around 7 a.m. to report that his silver Mazda was stolen from the 1500 Block of 93rd Avenue East. In addition, the suspected car thief stole his vehicle with his infant still inside.

Moments later, dispatchers responded to another call about a silver Mazda that crashed at a Walgreens along South Meridian. It appears the child was left inside the vehicle while the thief fled from the scene.

Per reports, the child reconnected with her family shortly after.

PCSD Det. Sgt. Gary Sanders said the mother had been loading the kids in the car. After securing the 3-year-old in the vehicle, she went back to retrieve her other child, yet only to find the vehicle and her infant gone.

As for the suspect, police are seeking his whereabouts.

The roads are riddled with irresponsible and reckless drivers. Be on the lookout for them. When we remain alert and focused on the road ahead, we are less prone to accidents.

Contact the Sweet Law Group at (800) 674 7852 for a free consultation with our lawyers. Over the years, we’ve settled cases involving car accidents and disability law. If you believe you have a case, call us today to determine your legal options. We have helped families who’ve suffered financial loss, despair and the sudden death of their loved one. It’s not too late to seek legal action.