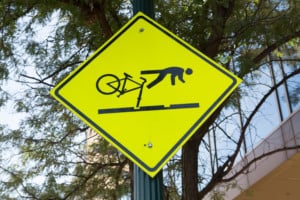 OAKLAND, CA (January 2, 2019) – A 14-year-old bicyclist was struck on 34th Avenue by a vehicle Wednesday afternoon and is critically injured.

According to charging documents, at around 12:23 p.m. on January 2, Leah Conner, 36, was driving southbound on the 1100 block of 35th Avenue in Oakland when the victim collided with her car while riding his bike. The boy rolled onto the hood of the car and then fell to the ground.

Conner kept driving, trapping the boy underneath the car as she traveled past a bus stop, south on 33rd Avenue, east on San Leandro Street and then south on 34th Avenue, where she came to a dead end.

At the dead end, Conner stopped, backed up and then drove forward, freeing the teen from under the car. After pulling into a nearby driveway, Conner and the passenger got out of the car, looked at the boy on the ground and got back into the car and drove away, court documents said.

Investigators recovered the vehicle near the scene.

Cell phone video that surfaced in the days after the incident appeared to show the moments immediately after the collision. In the video, the boy is writhing in pain on the ground while yelling for an ambulance, as a man and woman stand over him for a few seconds before driving away.

At the time of the incident, Conner was on probation stemming from a DUI in October in Sonoma County.

According to a GoFundMe page for the teen, he suffered multiple broken bones, internal bleeding and severe road rash.

Leah Conner was booked into Santa Rita Jail in Dublin on Saturday morning and faces multiple charges, including assault with a deadly weapon, leaving the scene of an accident and reckless driving.

If you or someone you love has been involved in a bicycle accident, contact Sweet Law Group at (800) 203-3061. With over 40 years of experience in the legal field, we know what it takes to win your personal injury case. Let us help you achieve the justice and compensation that you deserve. Contact us today to answer any questions or concerns you may have at a location near you. We can also be contacted by email, online chat, and text message 24 hours a day/ 7 days a week.