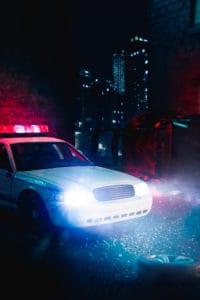 Initially, a man reported that his Nissan Pathfinder was stolen on July 23. By Thursday, his vehicle was again stolen from outside his Capitol Hill apartment.

Two Seattle police officers traveled east on South Othello Street before 3:00 a.m. Then, they witnessed an approaching Nissan Pathfinder’s headlights switch off. Eventually, an officer realized that the Pathfinder was included in an officer-safety bulletin. They were also warned that it was a stolen vehicle and Alande Gachette last drove the car.

After recognizing Gachette, an officer made a U-turn to try to stop the car. However, the vehicle turned right onto northbound Martin Luther King Jr. Way South. The officers then chased the vehicle and turned on their emergency lights three seconds before the Pathfinder failed to yield at a red light at South Holly Street. Then, the vehicle crashed into the passenger side of a Toyota Camry turning left onto South Holly Street.

“They watched helplessly as the defendant plowed into a vehicle with the right of way,” reports revealed.

Due to the impact, the Camry’s front passenger seat was pushed behind the driver’s seat

The authorities located Gachette on a mattress in the Pathfinder’s back seat.

Gachette will be arraigned on September 24 on both the murder charges and earlier assault charges.

We extend our deepest sympathies to the family and friends of Sy Ly-Kiu and Su Thin-Sang.

What’s Next After a Wrongful Death

Also, an attorney’s goal is to safeguard the legal rights of families in the wake of catastrophic accidents.

Insurance companies only protect their interests. Therefore, we’re here to protect those of our clients.

“Our firm works tirelessly to ensure that the people we work for are granted the highest restitution possible. Although nothing can bring back those dearly departed, we strive to secure the future of our clients, protecting them from further losses,” explains Mark Sweet of Sweet Lawyers.

In the face of such a tragedy, it is important to make sure your family is taken care of. If you want strong legal representation to advocate on your behalf, contact Sweet Lawyers at (800) 674 7852. When someone dies in an auto accident, the children, parents, or guardians of the deceased have the right to file a claim. We are a wrongful death case law group that aims to do right by your loved one. Also, we’re determined to get you the best settlement while you work on healing and recovering. Call us today for a 100% free case evaluation. Above all, we believe your loved one deserves proper justice.