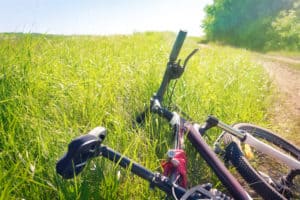 According to the Washington State Patrol, the incident happened sometime between 8:30 AM and 9:30 AM. 66-year-old Eatonville resident, Susan Rainwater, was riding her bike on the right shoulder of northbound State Route 7 when a vehicle struck her from behind.

The driver fled from the scene, leaving the injured woman in the road.

More than an hour later, an unidentified person noticed Rainwater’s crumpled bicycle and later found her lifeless body in a ditch. State troopers received a report about the incident at about 10:21 AM, and they arrived at the scene to initiate an investigation.

Responding officers found parts belonging to a black car near the site of the crash. It is also likely that the hit-and-run vehicle sustained front-end damage in the collision. Anyone who might have witnessed the crash or has additional information is encouraged to contact the authorities as soon as possible.

Sweet Law offers our heartfelt condolences to the family and friends of Susan Rainwater. Our thoughts and prayers are with them during this trying time. May she rest in peace.

Trust the experienced wrongful death lawyers at Sweet Law group when dealing with a hit-and-run incident. We understand what you and your family are going through and are here to help. With over 40 years of experience in the legal field, our team knows what it takes to win your case. We have dealt with a variety of cases including personal injury, wrongful death, disability, and car accidents. Call us at (800) 203-3061 to arrange your free consultation with an experienced legal professional in your area. For your convenience, we are also available through email, text message, and online chat.