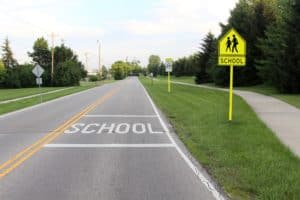 According to San Diego police, the incident occurred shortly after 8 a.m. at Ocean View Hills Elementary School, on Del Sol Boulevard in the Ocean Crest neighborhood near Otay Mesa.

The child had run in front of a 2017 Cadillac Escalade driven by a 57-year-old woman, police said.

The accident took place on an access road at the back of the school by a park, a district official stated.

The child was transported to a hospital with a head injury that officials said was not considered to be life-threatening.

According to San Ysidro School District spokesman Francisco Mata, administrators sent parents a letter to inform them of the incident. The letter stated that school staffers immediately responded and called 911.

Whether you are a driver or a pedestrian, it is important to abide by all traffic laws and observe safety precautions. If you’re behind the wheel, always watch out for pedestrians. Slow down, prepare to stop, and be extra careful especially when driving through an intersection, school zones, parks, or residential areas. If you’re a pedestrian, always walk on a sidewalk or a crosswalk. If the road doesn’t have sidewalks, walk on the shoulder and face oncoming traffic. This way, you and the motorists have a better chance of seeing one another and react if a situation arises.

Reach out to the experienced lawyers at Sweet Law Group when involved in a serious traffic accident like a pedestrian-car crash. We have over 40 years of experience in the legal field, and we know what it takes to win your case. Our attorneys and professional legal team have dealt with cases including pedestrian-car accidents, wrongful death, personal injury, and disability. Untiringly, we will fight to achieve the justice and compensation that you and your family deserve. Call our offices at (800) 203-3061 for a free consultation with a professional in your area. We can also be contacted by email, online chat, and text message 24 hours a day and 7 days a week.